Over those many decades of commercial flying I developed a strong affinity for the stark beauty of the Four Corners region.  Over the PA I’d point out that it was the only place in the U.S. where four states come together at right angles—Arizona, Utah, Colorado and Minnesota.  Mind you this was back in the day when people actually looked out of the windows, passengers and pilots alike.  Ahem. ‘Tis a region with appropriately modest population and infrastructure to minimize distraction from the beauty and solitude.

As SoCal Del Martians we are used to seasonal changes, but not on the order of many locales, so come autumn, Cathy and I frequently heed the siren call of deciduous extravaganza.  In the mountainous regions of southern Utah, one gets to double dip with the flora as punctuation for the colors of the earth itself.  Yum.

Catalina had set up her SDSU schedule with an eye to having the time off and we settled on a VRBO home in Brian Head, a quiet ski resort in the Dixie National Forest at an elevation over 10,000’ and a short drive out of Cedar City, where the Cirrus took us in 2:02. 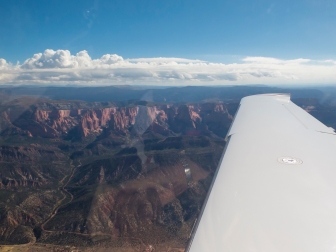 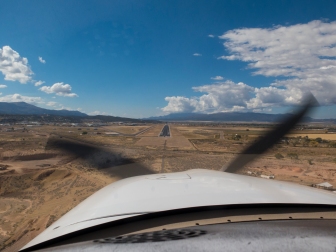 The otherwise sleepy aerodrome, these days is actually busy with extensive helicopter training for flight students at Southern Utah University.  The folks at Sphere One Aviation had a silver Nissan rental ready for us—in fairly nice condition considering its 166,000 miles on the odometer!  Well, anyway it ran well and like The Little Engine that Could, managed to get us to all of our trailheads and national monuments and parks.

Neither of us had ever visited Cedar Breaks National Monument, just a stone’s throw from our Brian Head lodging, so now was our opportunity, and it did not disappoint.

The only downside for some, might be that unlike Bryce Canyon National Park, all the hiking at Cedar Breaks is along trails atop the canyon rim.  But at over 10,500′ there was enough gasping along the rim’s undulations to not add more by dropping into and then back out of the canyon itself.  Not to mention, the topside view left us gawking as well as gasping.

While the second time-lapse was running, I read in the monument materials that the Spectra Point trail led to an outcrop with multiple Bristlecone pines.  Oh, my.  Bristlecones are the oldest living things on earth, up to 5,000 years old, although Cedar Breaks’ versions have matriculated through a mere 2,000 seasons.  Lord knows in this election season it sure helps to think in terms of a longer perspective.

Can you imagine the stories to be told from this vantage point the past two millennia? 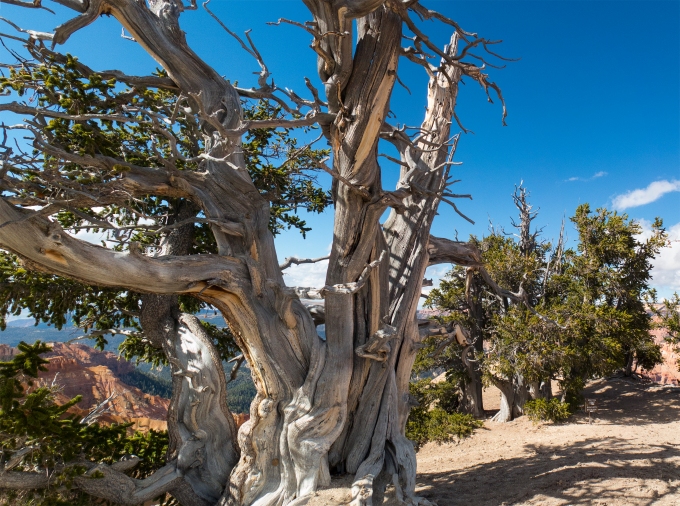 Bristlecone pines have a somewhat intriguing life plan.   Some of the older portions of the tree twist to take best advantage of the location, and eventually die off, leaving the newer parts to continue being sustained by the roots.  These are hearty plants that take root in poor quality virgin soil that would not support other trees, and with a dense resinous wood resistant to insects.  They survive with very little water, not to mention carrying on at high elevations that would be above the tree line for many species.  In a word, durable.

Plus they are wondrously gnarly.  Given the advancing arthritis in my limbs, I feel a particular affinity with this specimen, so reminiscent of Tolkien’s Treebeard.  I’m sure he is gesturing to make sure I appreciate the beautiful contrast between the red rock and the golden Aspens over yonder. Probably smiling internally at the colorful pranks of those youthful lowlander whippersnappers with their flashy colors.

On our second day, we ventured forth to Bryce Canyon, about an hour’s drive east of our lodging.

I thoroughly enjoy making beach drip castles with the grandchildren.  Besides their redolence with my own youth, they always remind me of the sandstone filigree of Bryce. Bryce, like Zion, has shuttles about every twelve minutes that take riders to and from the various viewpoints and trailheads.  A great way to get about and minimize traffic jams. 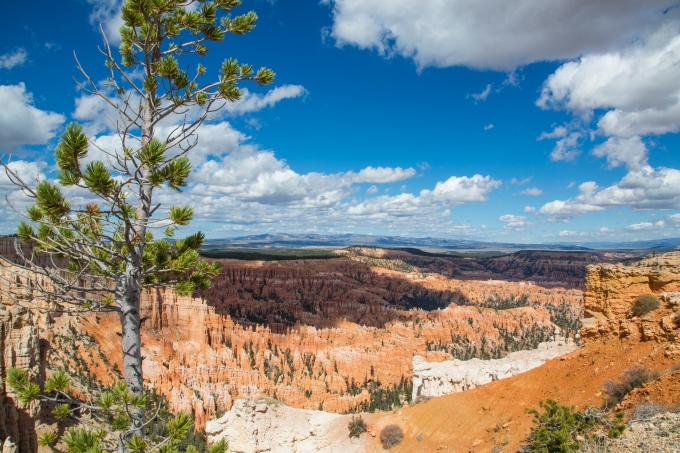 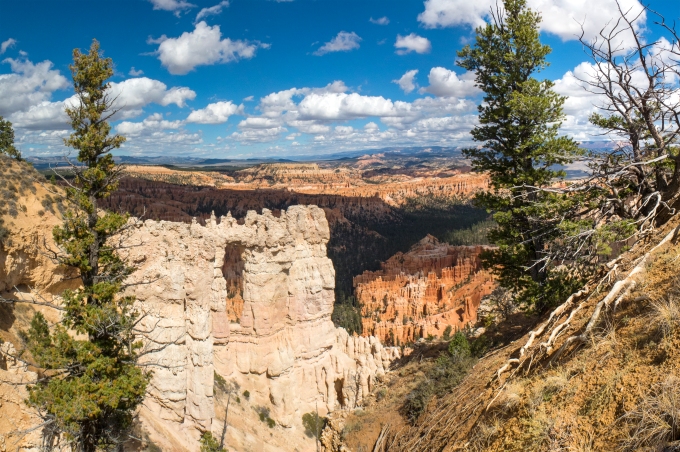 Following our day at Bryce, we considered driving 1:20 or so the next day to Zion National Park.  We decided, instead, to stay near Brian Head and hike in the Dixie National Forest. Zion is superb, but worth multiple days in its own right, and the roundtrip drive time was off-putting.  Ol’ What’s Her Name did a bit of online research, and came up with a couple of days’ worth of exploratory hiking from two trailheads on the Virgin River Rim Trail, meandering up and down either side of 10,000′. This entire region is part of the northeast-bound rising terrain of the Grand Staircase, forming among other things, a watershed that includes the Virgin River.  Excuse my tangentialism, but here’s a glimpse of the Virgin River flowing through Zion from a previous year’s visit.

Cathy’s excellent research really hit the target for beauty, exercise and perfect crowds—we saw three other hikers on the first day, and zero on the next. 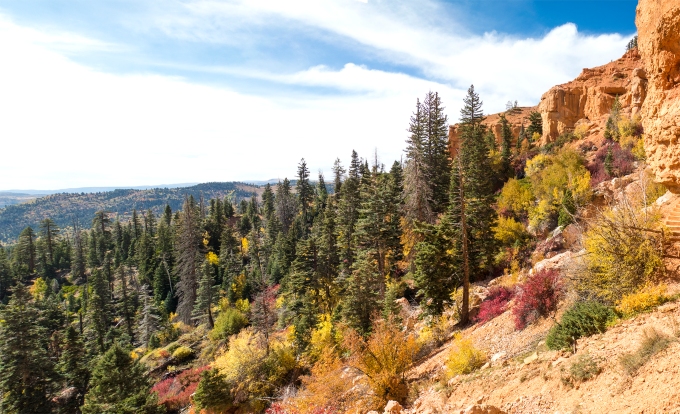 Climbing the Virgin River Rim Trail southeast-bound from the trailhead at US Forest Service road #054.  Weather conditions were primo throughout our stay, but layering was absolutely essential, with early morning temperatures in the low thirties, warming up to the middle forties, and strong gusting winds waxing and waning throughout the days.  With the exertion of hiking at these elevations it felt cool, but not cold—so long as you kept moving and didn’t dally in shaded areas with the full force of the wind on you. Cathy complained about cold fingers, but didn’t let that deter her. Rounding a bend in the trail, or easing along the edge of red rock drop-offs,  we were constantly reinforced for our exertions.

Gazing at the back side of Zion National Park from the trail.

Well, as mentioned at the outset, we came for the fall colors.  Veni, Vidi, Vici.  You Latin experts will have to change that to the first person plural, past tense—We came, We saw and We conquered the opportunity to drink deeply from the splendor of it all. 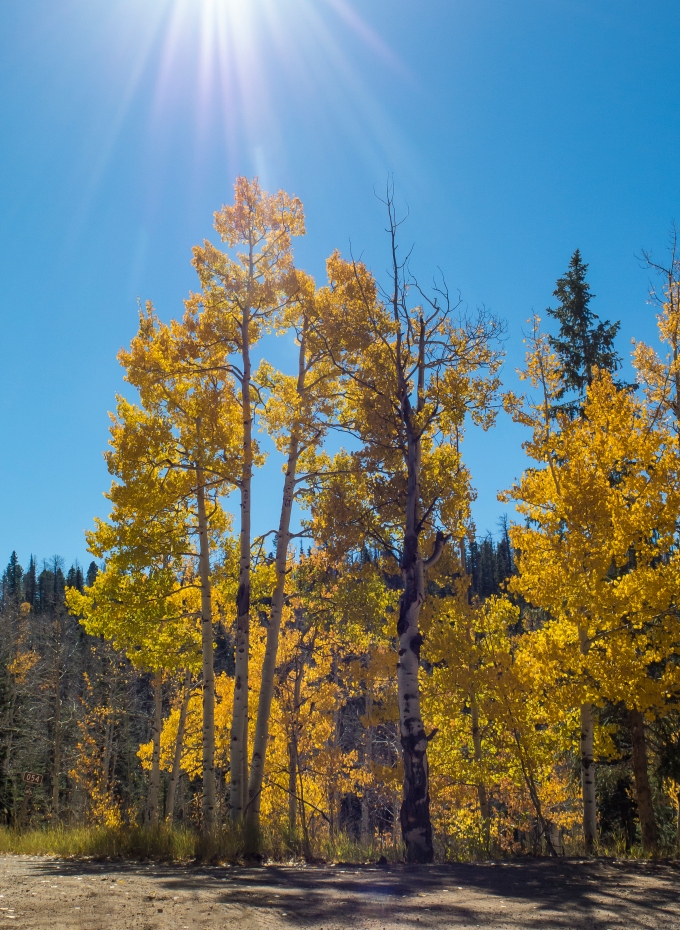 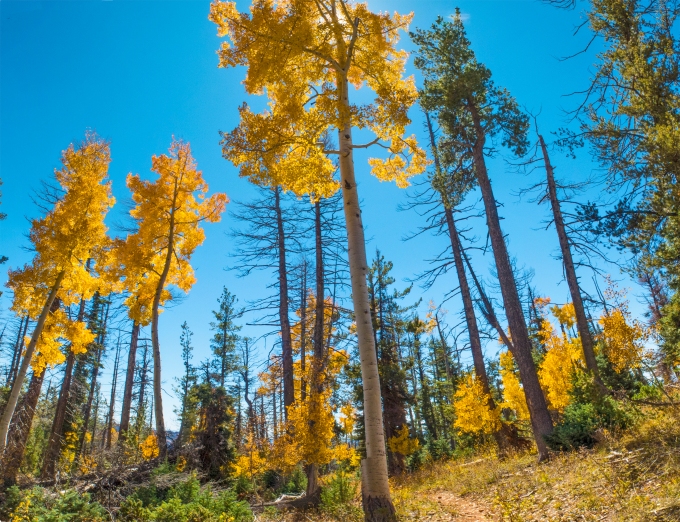 And, yes, that’s the trail along the forest floor just to the right of the tall Aspen in the center of the frame, above.  I’m sure you’ve noticed the title to this missive is a silly double entendre, on hitting the season at maximum coloration, but also the mountain peaks in the region in which we traveled.   Trees’ peak color is very short-lived.  The image below of this particular strand of trees was taken as we drove on that unpaved #054 USFS road proceeding to the trailhead in the morning.  By that same afternoon returning to our lodging, the leaves were already noticeably more orange and rapidly blowing from the branches. 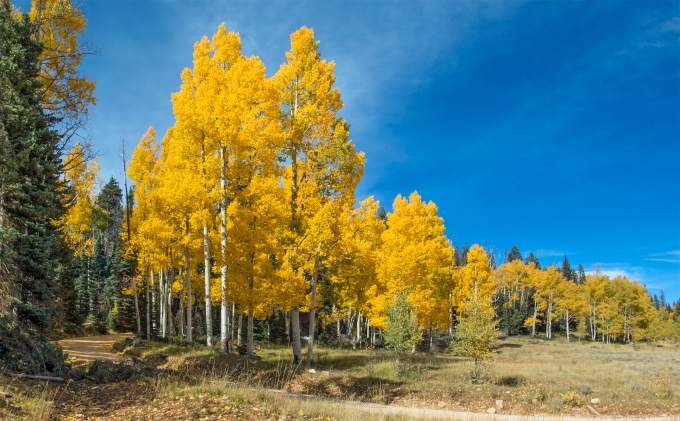 Consider another example—the strand of Aspens, below, is the same as that shown in the very first image in this post, but seen twenty-four hours later.  Gold, turning to rust.

Following our second days’ trail hiking I returned to another vantage point at Cedar Breaks with hopes of a viable sunset time-lapse sequence, the cirrus clouds you see in the image above, glowing in iridescent glory.   However nature had other ideas.  The clouds disappeared entirely, leaving an entirely clear sky—lovely by day but lacking in the pizazz of clouds lighting off in prismatic excess at and after sundown.

Still, the rich low light giving way to dim pastels has its own appeal.

My intention was to follow up that T-L with another of the Milky Way arcing above the southern through southwestern horizon, with a nice new moon setting in the bargain.  Great idea, until the reality of an upper 20s temperature and about 25 knots of wind racing up from the canyon floor and over the rim directly into my face took hold.  This would have required nearly three hours to film, and my teeth-chattering got the best of me after about twenty minutes.  So just a few still frames lifted from those from the beginning of the abortive T-L.  Dang, but I wish I’d had warmer clothes and maybe a bottle of Laphroag as anti-freeze.  No guts, no glory this time. 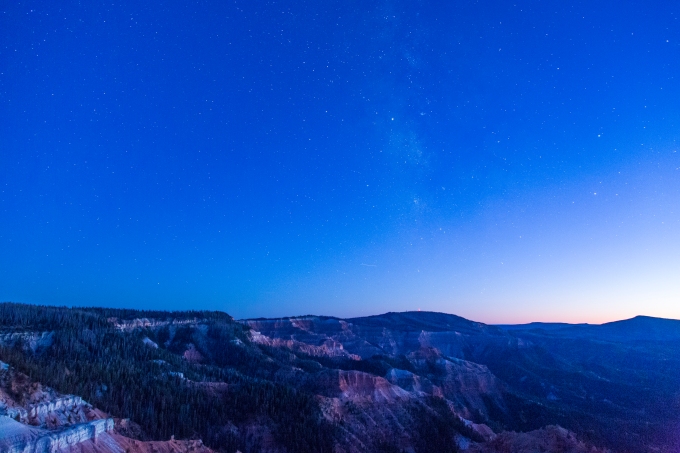 That’s Venus, setting in tandem just below the moon, which while a sliver in real time, appears here as a globe, given the speed of movement over the fifteen seconds of the time-exposure.  These frames all come from a time over a half hour after it became dark.  Isn’t our galaxy just gorgeous, and can you see, as I do, how it forms a ghostly lion’s visage staring back at us, two glowing eyes above the snout, an umbral mane defusing into the night sky?  The horizon glow is probably a mix of residual twilight augmented by Lost Wages’ luminescent excess, not visible with the naked eye, but fully apparent in a fifteen second exposure, taken every twenty seconds at ISO 2500.  That fifteen second exposure is what necessitates 3 hours—three frames a minute for 180 minutes is 540 frames, and at 24 frames per second you end up freezing to death for 22.5 seconds of T-L video.  Brrrrrr.

I’d like to finish up by dedicating this missive to two chums—T.J. Steer, a United pilot colleague from yesteryear with whom I had a guys’ Cirrus trip to the Four Corners, and Wes Mudge, with whom I’ve had a couple of trips in this region.  Great guys and great memories. Being in this region has had me thinking of both of them rather a lot.  T.J. has flown west, very sad to say.  Wes is still happily amongst us, glad to say.