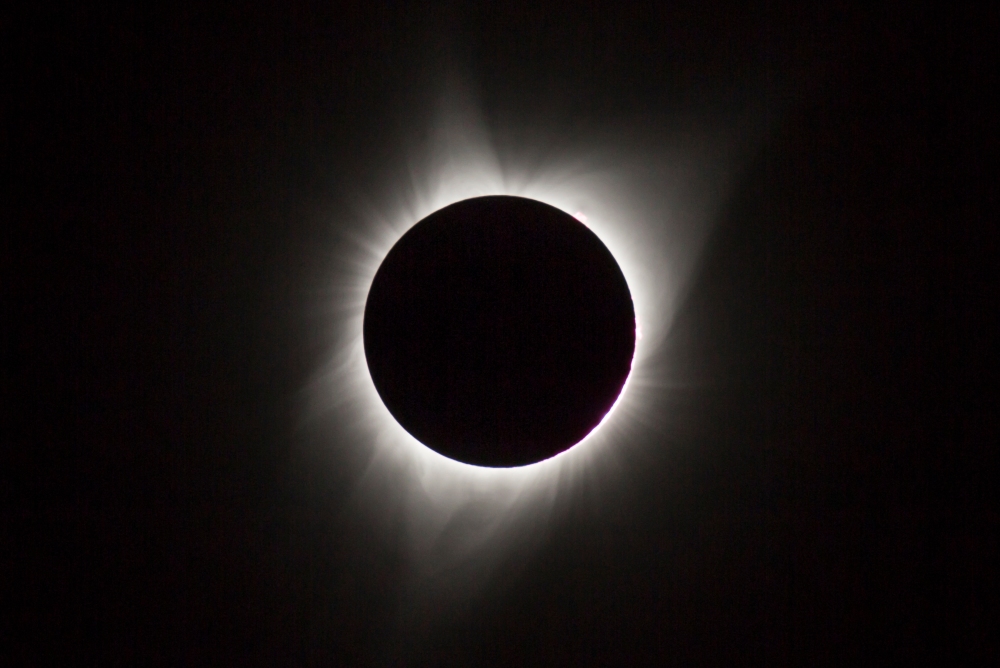 As you surely know, the U.S. enjoyed a cosmic (dare I say, near biblical) event last week— the first total eclipse of the sun to cross the entire country in 98 years.  Perhaps some baseline tidbits?  A solar eclipse occurs when the moon’s orbit brings it in alignment between earth and the sun.  Our moon’s diameter is 400 times smaller than the sun’s, but coincidentally, the moon is 400 times closer to earth than the sun. The moon’s orbit is modestly elliptical, so some alignments of the moon between us and the sun do not fully eclipse the solar disc, producing a so-called annular eclipse.  But for this August event, the moon was at just the right distance from earth to produce a precisely complete beach umbrella shadow total eclipse beginning off the west coast of Oregon and arcing southeast to exit South Carolina into the Atlantic, in a path roughly 60 miles wide.

Astronomers speak of total eclipses in four stages, labeled C1, C2, C3, and C4, referring to the very beginning of the eclipse (the time at which the orbit of the moon’s leading edge begins to cut in front of the outside periphery of the solar disc), the beginning of totality, the end of totality, and the end of the lunar periphery in front of the solar edge.  Our viewing location was atop a bluff above a radio-control model aircraft airfield to the north of Redmond, Oregon, carefully chosen to produce an adequate duration of totality, an absence of teeming throngs (just the four of us), and providing relatively quick egress from there to our Cirrus, awaiting us on the ramp at the Redmond aerodrome, KRDM, for transport back home.  Cathy had classes to teach the next morning.

It’s amazing what you can find on the internet and the sort of apps that can be added to a mobile device these days.  In pre-eclipse recon, I discerned that my chosen camera site would have C1 at 09:06:24 with the sun at an azimuth of 103 degrees (ESE) at an elevation of 29 degrees above the horizon,  and so on.  See my hand-scribbled crib sheet below, which I frequently extracted from my shorts’ pocket as reference during the morning’s passage.  The vagaries of mobile phone latitude/longitude position determination during a dry-run rehearsal were such that, in fact, we got a bit more totality than expected, but otherwise pretty much on the mark. 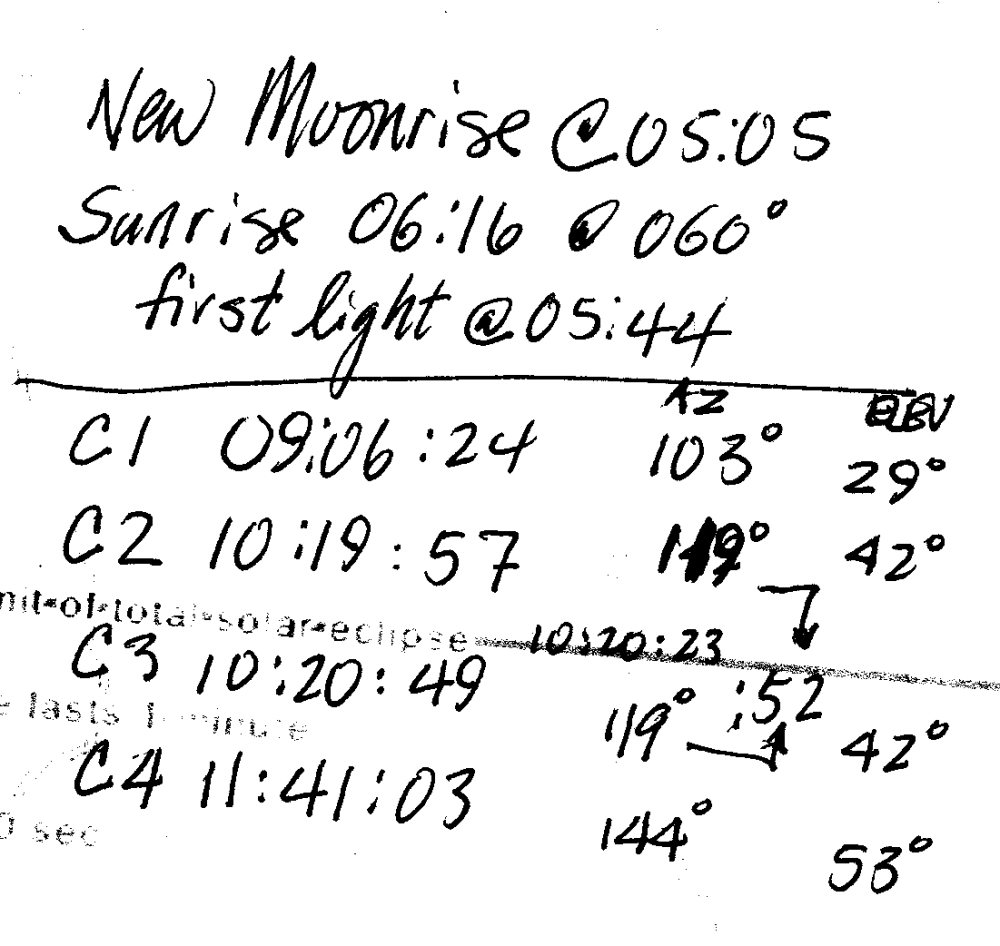 My crib sheet makes reference to a new moon moonrise at 05:05, followed by official morning twilight at 05:44 and sunrise at 06:16.  This was all too glorious to pass up, so I arose at 03:30, with host Neil H kindly driving me to our viewing site so as to be setup and capturing Time-Lapse of this beginning of the day.  The new moon was such a sliver that, with cirrus clouds to the east, it escaped being noticed at all, but the rest of the dawn was lovely, as I hope the linked video below will convey.  My Cathy came along with Neil’s wife Kathy S (meine frau’s college dorm chum) a tad after sunup, and before C1.

All these celestial machinations are a demand for my peabrain.  Okay, the phases of the moon are the result of the terrestrial shadow on the lunar surface with earth coming between the sun and the moon.  A solar eclipse is when the moon comes between the sun and the earth, the moon throwing its shadow racing across the earth.  But on this day, the moon rose first, even if we couldn’t see it in its newness.  The sun followed, over an hour later.  Then with the sun climbing left to right in the southeast sky, the moon’s shadow began taking cookie monster bites out of the sun, with the chewing starting at the upper right… 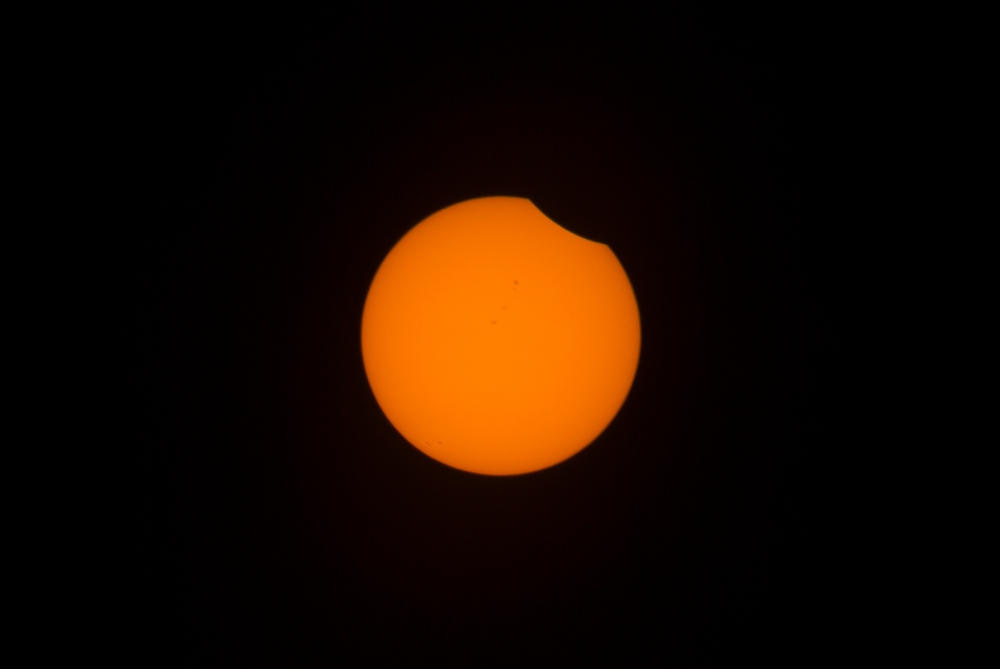 …and moving to the lower left across the sun.  I guess that means that the speed of terrestrial rotation about it’s axis was faster than the speed at which the moon was rotating around us?  But it makes steam exit my ears just thinking about it.  Anyway, it was just wonderful being ill-informed and wide-eyed observers.

Not to mention, selfie photographer subjects. 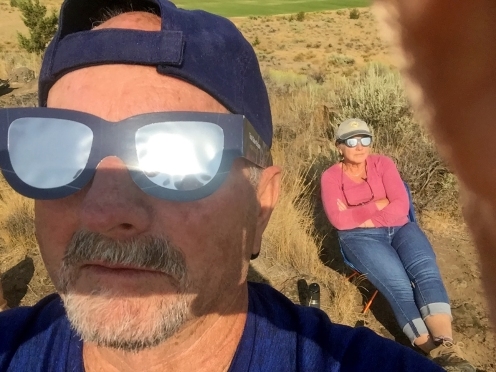 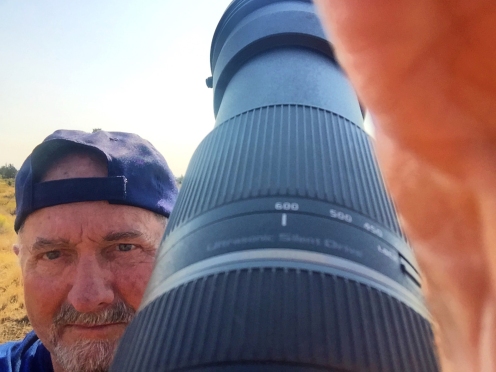 So, it’s the moon, betwixt the sun and earth that blocks the sun to produce the eclipse, casting its lunar shadow across the earth’s surface in the process.  C1 corresponds to the beginning of the penumbral shadow moving across the terrestrial surface, the diffuse shadow ahead of the full umbral shadow which races across the earth like a tsunami, first overriding then receding at C2 and C3 respectively.  Those not in totality’s path also take in the penumbral shadow to the side, and it ceases everywhere at any location’s C4 time.

Midway between C1 and C2 the glow of the grasses and sagebrush began to dim while the cameras captured their T-L, and successive still imagery.  That’s a very clear sky, but already dimming. 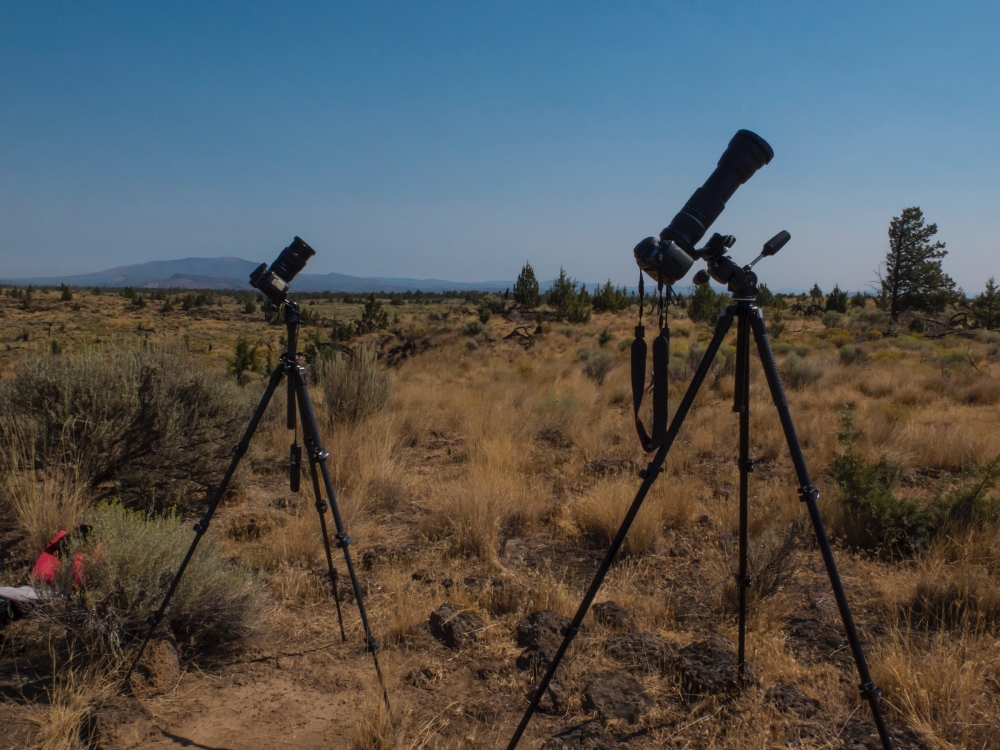 And mere moments before C2, the sky began suddenly darkening in earnest, with the umbral shadow racing towards us readily observable. That would be hostess, Kathy, below, taking in the moment.  This twilight was of a different look and feel than vanilla dawn and evening twilight.  The hues, which seemed to emanate from some gossamer veil of light grays and violets cast over us didn’t correspond to the pinks, oranges and reds of the myriad sunups and sundowns I regularly enjoy. 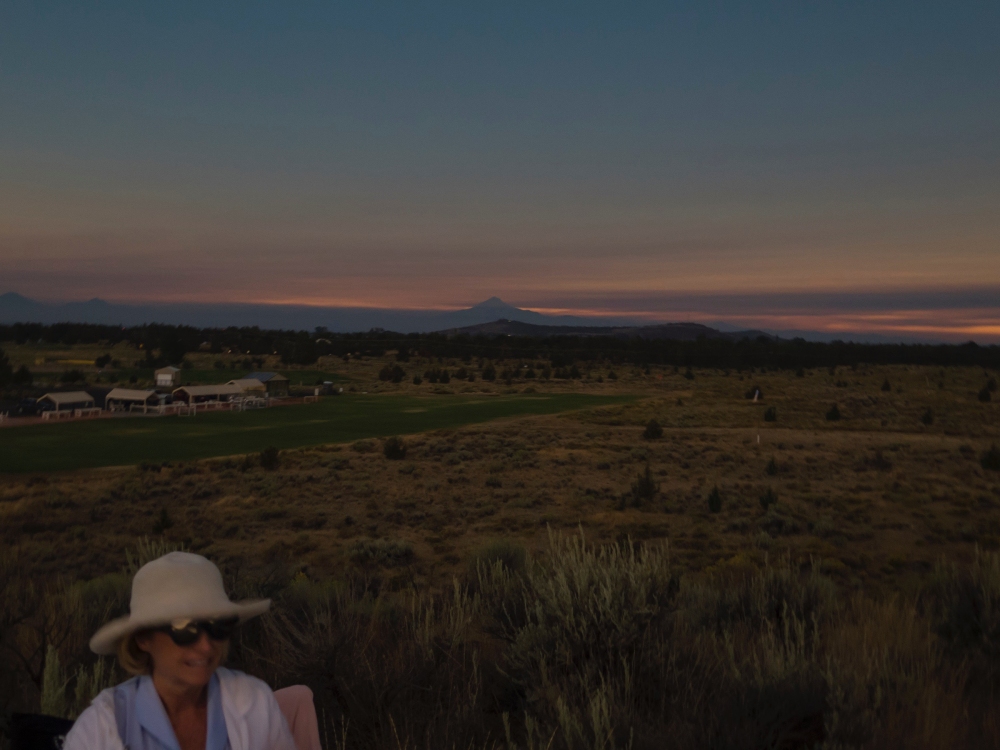 At the same instant as above, just before C2, the last moments of solar view before totality.

There’s more shadow things to mention.  I had heard that two things are possibly perceivable.  One is “Baily’s Beads” named after Francis Baily, who, in 1836 posited an explanation of lunar surface peripheral light at C2, and the other is referred to less elegantly as “snakes,” myriad twisting, writhing vaguely linear shadows on the earth’s surface in the split moments as totality comes on.  Both are caused by the same thing—the lunar surface is not a uniformly smooth circumference, but one composed of mountains, craters, valleys and such.  At just the moment of totality the sun’s light is not instantly and totally eclipsed, but manages a moment or two of wriggling past the low spots while being blocked prematurely by the higher terrain.  Baily’s Beads are a dancing of light at the moon’s edge as perceived from earth. From observing it with the 12X magnification of the telephoto,  I saw all sorts of spectral color variations in apparent prismatic effect, light beams bending around the lunar topography and coming through earth’s atmosphere in some angular warpage.  Breathtakingly beautiful.

With a little inference, one can imagine how this might make darting snake-like shadows momentarily appear on our earth’s surface.  But I’d like to share a personal vignette that you fellow terrestrials may have experienced, especially those who do first light dog walks and surf checks along the bluff in my Del Mar haunts.  When the sun is up but not yet over the hill of Del Mar, the surf near the shore is cast in shadow by the cliff.  As the sun rises farther, there are a few seconds when there is direct light on the white foam, brilliantly lit, simultaneously with penumbral shadows from higher trees and such up the hill.  This softened, shadowed light quite literally dances aglow in fervent gay abandon in an absolutely magical way around the churning whitewater.  It is momentarily fleeting, pretty much an earthly version of what a keen observer on the lunar surface would see at the edged interface of umbras and penumbras on the moon if it had an atmosphere to diffuse shadow.  Pick the next sunny morning here and transport yourself into this unique earthly experience of the physics of beads and snakes.

There’s yet another eclipse experience about which many have already heard—the “diamond ring.”  I don’t know if it ever occurs at the beginning moments of C2, like Baily’s Beads.  I did not perceive that, anyway.  But as C3 came on, the sun breaking forth  at the lunar periphery, we were treated to a spectacular 1000 karat version perfectly in keeping with Richard Strauss’ Also Spracht Zarathustra fanfare. 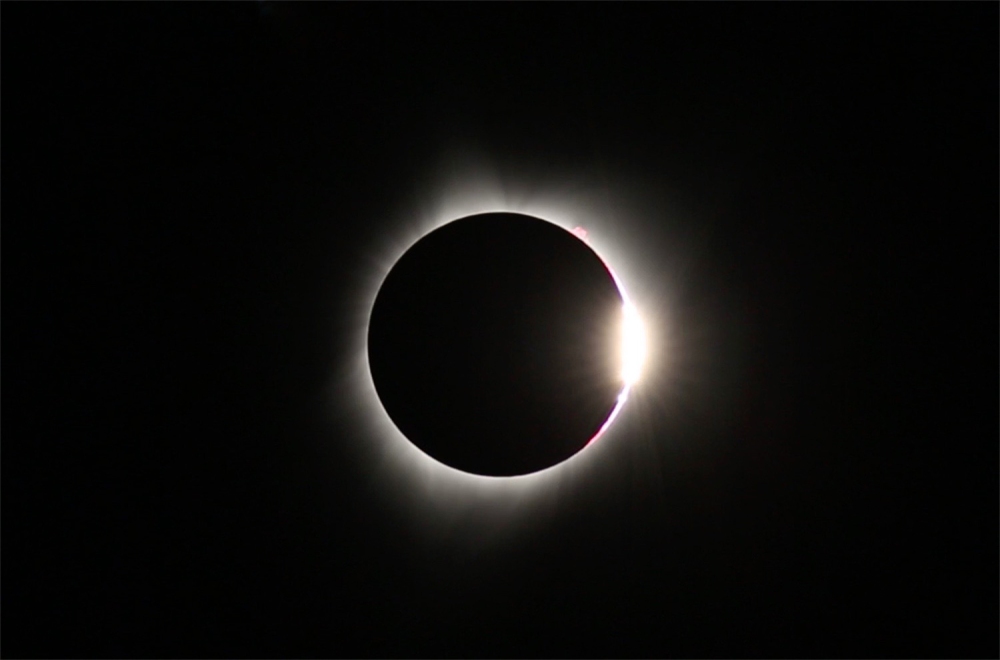 Go ahead, indulge yourself, and turn up the volume:

So here’s the deal.  All of this seems so precise and technical, because it is.  The sort of information one would use to carry the proper gear, to the proper location, set up in the proper manner to assure a no-sweat, slam dunk oh-so-informed turn-key eclipse experience.  True as that may be, no amount of preparation as to the technical details prepared the four of us viewers for the emotional experience.  Not on a par with walking on the moon looking back at our earthly blue marble home, but a whole lot more than taking in a fine sunset or a full moon rising above the coastal mountains in the east.  It haunts me still, and I am already thinking of the next opportunity, perhaps Chile in July 2019, and for sure, Fredricksburg Texas on April 8, 2024.

May I present a multimedia version of our morning on August 21, last?  Don’t forget to observe the dark sunspots on the sun and the red solar flares at the one o’clock and four o’clock positions.

I thank Victor V for keying up Psalm 8 for me, and Russ H for doing the same with this quote from Blaise Pascal:

“In faith there is enough light for those who want to believe, and enough shadows to blind those who don’t.”

Headed home along the western edge of the Sierra Madre range. 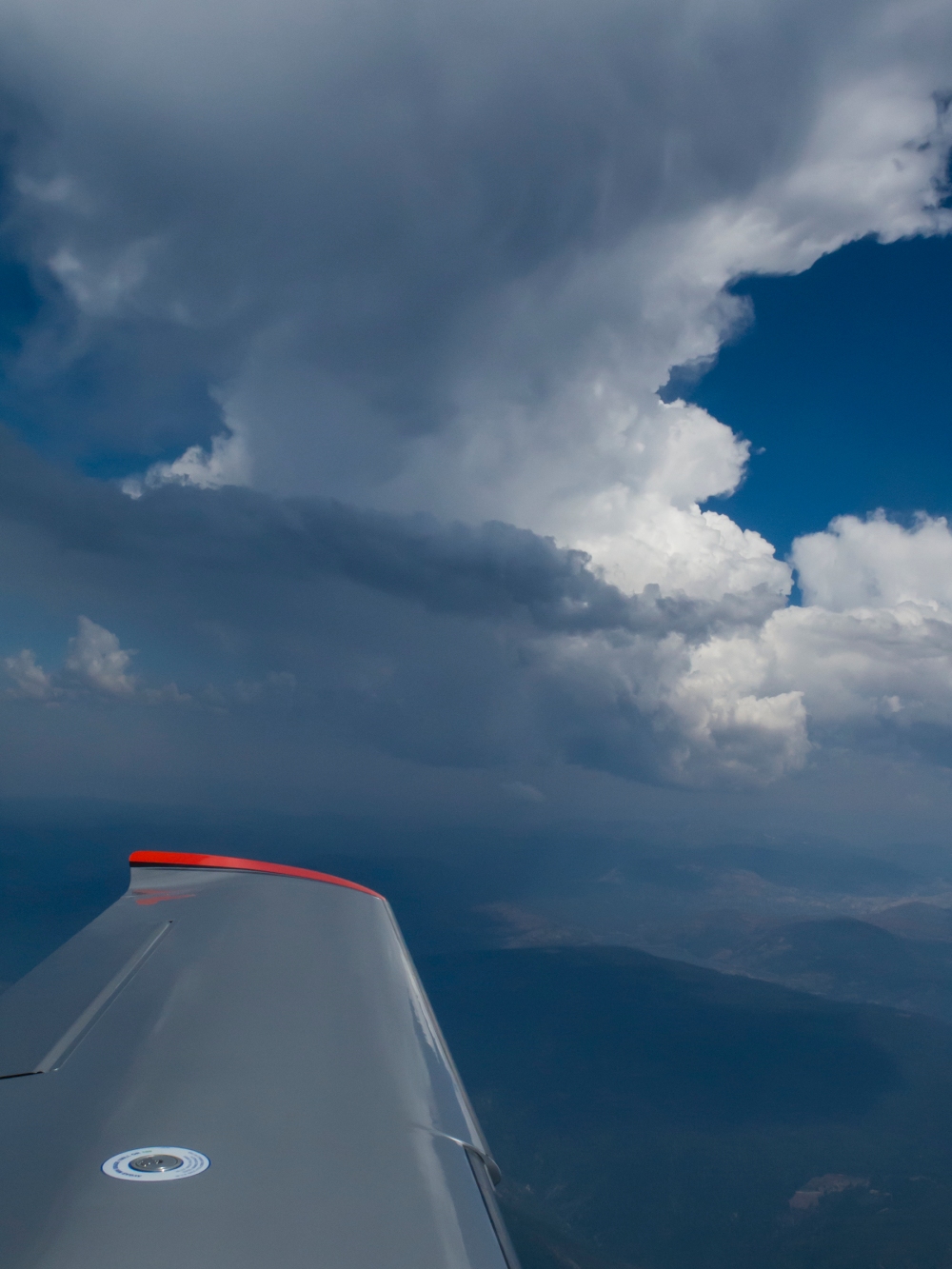 Home in time to take in the end of the day from the front deck. 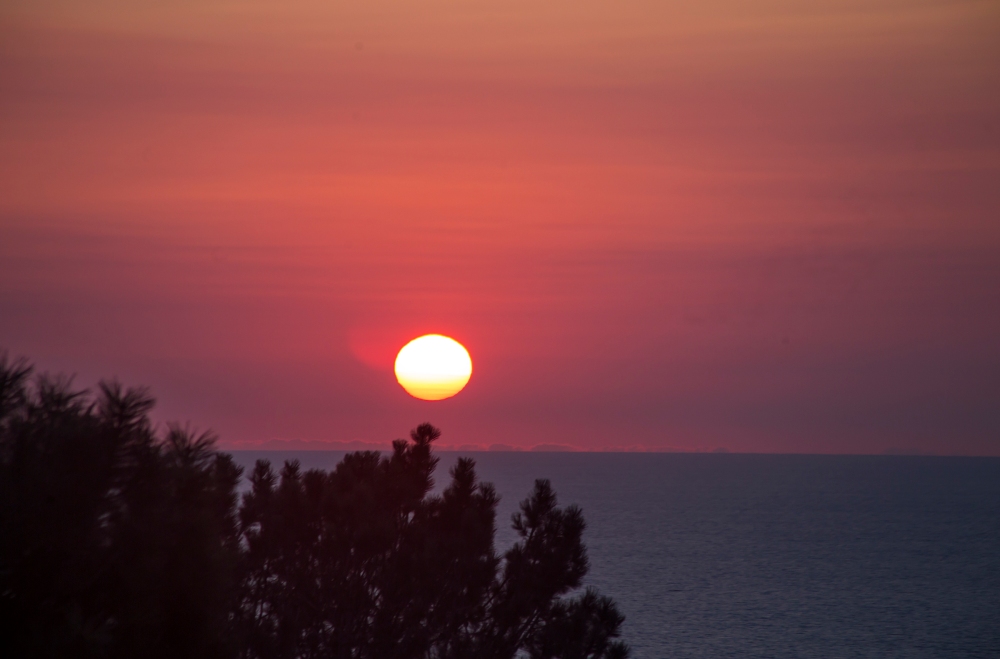