It having been too long since we’d taken a family dive trip, we decided to explore a new site in the Fijian islands—the Paradise Taveuni Resort.

Getting there from SoCal is modestly straightforward—a 10:20 nonstop from LAX to Nadi (pronounced Nandi) on the main island of Viti Levu, then an hour’s flight by De Havilland DHC-6 Twin Otter to Taveuni, and another hour’s drive along a rugged, mostly dirt road to the southern end of the island.

Fijians have a well-deserved reputation as among the friendliest people extant, and the welcome we got at the resort was a perfect example. The staff warmly greeted us by name right from the get-go, and throughout the days engaging us with a smile-suffused “Bula”—the Fijian equivalent of Hawaii’s Aloha.  Literally translated as “life,” it is routinely used as a hello greeting.  These are people who smile with their eyes, and routinely stop what they are doing to engage with you.

The resort is lovely and small, and recently rebuilt. 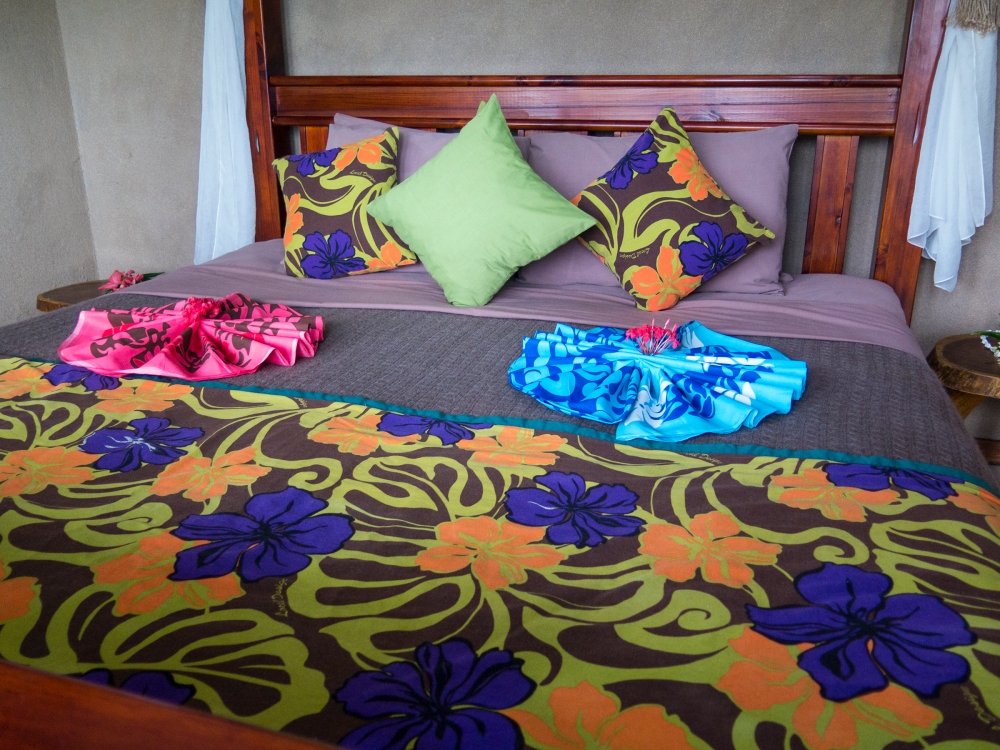 The view from the room, a perfect place to read in the shade after the morning’s diving, and before the sundown libations or dinner.

After lunch on our first afternoon, we did a single tank dive off the resort dock to verify equipment functionality and to confirm that we still knew how to apply basic underwater skills. Then we settled into relaxing with a book and an adult libation as the sun settled toward Vanua Levu across the Somosomo Strait.  Jet lag be damned!

Wasting away in Margaritaville

That’s the resort dive boat, by the way.  Small, but seaworthy and capable of keeping something like eight divers comfortable in shade from the tropical sun.  The resort sits at 16 degrees south latitude, and take your pick—180 degrees east longitude, or 180 degrees west longitude.  The international date line takes a zigzag to the east so that the entire island nation is in the same time zone, not to mention the same day.  Taveuni is five hours earlier and a day later than California.  In fact, Fiji begins the new date for the world.  Keep that in mind for your next New Year’s Eve.

The resort is renting that dive boat, because the three they had operated were destroyed last February by Cyclone Winston.  There’s much to say about this beast.  Cyclonic circulation is rotation around a low pressure system in the same direction as the earth’s rotation, a circulation, that due to coriolis effect, is counter-clockwise in the northern hemisphere, and clockwise down under.  Common names for cyclones are hurricane, chubasco, and typhoon.  Winston was the strongest cyclone ever recorded in the southern hemisphere, and that means all oceans and seas.  It came ashore, its eye near the resort, with 185 knot winds.  If you’re not “knotically” inclined that’s over 210 mph!  This exceeded the normal velocity standard that maxes at Category 5, so Winston got it’s bad boy rating of 5+.

The resort was totally destroyed, and the inhabitants at the time survived in a shipping container located behind the main office/dining area and wedged between coconut palms.  The resort staff is from nearby local villages, and those villages and the homes were likewise obliterated.  Resort owners Allan and Terri Gortan, Aussie by birth, and Fijian by current citizenship, were denied even the benefit of insurance, which dropped coverage for any cyclone over Category 4.  They set about building a dormitory for their homeless staff, and then rebuilding the resort, itself.  Providing a place to live, food to eat, work and earnings, and the opportunity for all to come together for a common purpose.  Team effort.

Not at first grasping the magnitude and import of all this, we were the beneficiaries of introductory rates as they bootstrap the resort back to its former glory.  The resort is lovely, but there was a modestly attenuated level of poshness than what jaded jet-setters expect, and thinned out vegetation.  It took about a day for us to realize that we got the glorious end of the bargain, and I’m not talking dollars.  We got to be the honored recipients of this team effort, tangentially contributing with our stay, to the industrious way these proud, hard-working people were elevating themselves, the resort and their communal lives.  The vibe was infectious and sincere at every turn.   This is something you can’t buy at a Hilton or Marriott.

As the saying goes, one picture’s worth a thousand words.  The captain readies the dive boat to come from its mooring to the dock for the day’s dives, and this quiet, shy woman is hand weeding the newly replanted pathway.  Each day began this way.  Sharing in this rebirth was the most satisfying highlight of our stay.

But we’d gone to Taveuni for the diving, and that was certainly a stellar feature.  Most of our dives were along the 13 mile long Rainbow Reef in the Somosomo Strait, and Vuna Reef along the southern tip of Taveuni.  Common depths we dove were between 50 and 110 feet.  Water and air temperature were about the same at 80 degrees F, and water visibility somewhere between 60 and 150 feet.  Oceanic decadence. 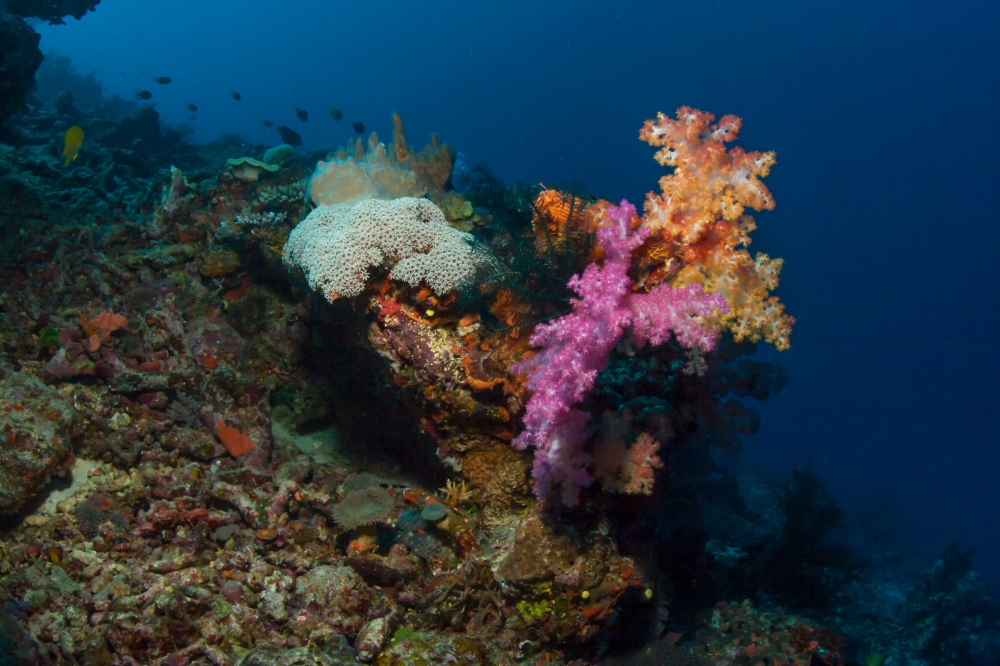 Nurtured by nutrient rich currents that wax and wane with the strait’s tidal changes, Rainbow Reef is noted for its soft corals, exuberant testament to nature’s kaleidoscopic palette. 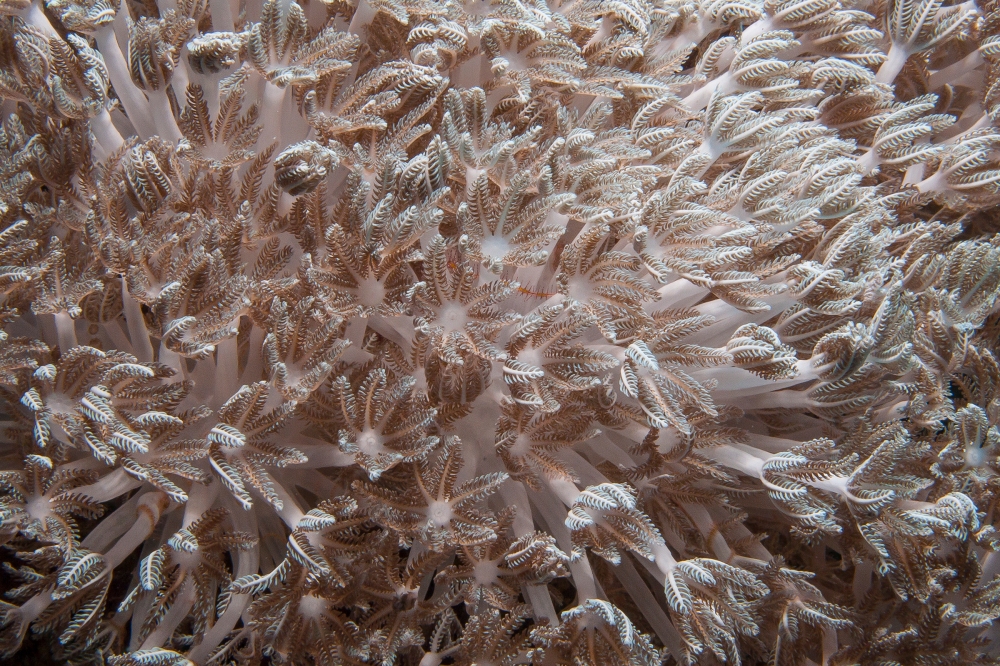 Another byproduct of the currents are fan corals.

Sunlight through a fan, as Torrey and Cathy swim by

Corals, of course are living organisms.  They are sensitive to the nutrients of the water, but also its temperature, its pH, and man-made toxic runoff.  Scientists partially gauge the health of the aquatic environment by the health of the corals, which are central to the symbiotic interplay of fixed and swimming creatures. 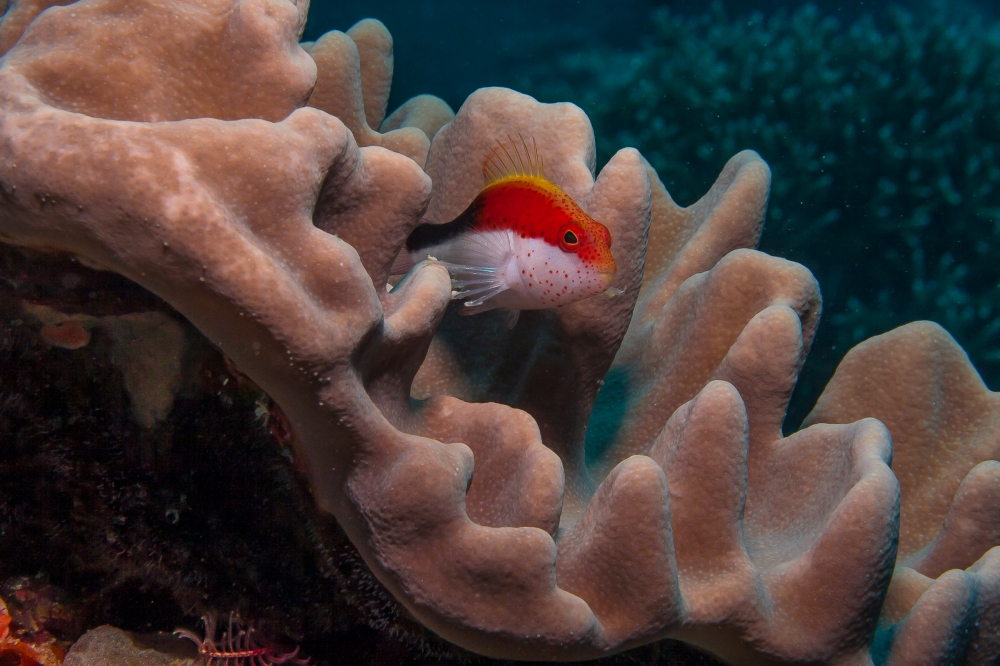 Two fish hiding in this colorful coral. One dark eye peering back at me

Typically the dives last approximately an hour underwater, then an hour on the surface, followed by a second dive.  This surface interval reflects the physiology of the body’s processing of air, which is just under 21% oxygen and 79% nitrogen.  We consume the O2 to power our bodies, but the nitrogen, being inert to respiration, dissolves in the tissues and bloodstream under the pressure of the depths and is slowly exhausted at the surface lest bubbles form in tissues and joints producing the debilitating experience of “the bends,”which can literally bend the body in response to painful nitrogen-infused bubbles in joints.

One of our dive days was a three tank gig.  After the second dive we boated to a crescent beach on Vanua Levu for an alfresco lunch to increase the interval before dive 3.  Our dining table was a fallen coconut palm.    The cafe view was none too shabby.

After lunch, between dive 2 and dive 3

…and following the dives returning us to the resort.

After the dives, returning to the resort.  Happy faces with mask imprints.

On two tank days we’d enjoy a delicious lunch from a daily-changing menu, then repair to that hooch overlooking the water, perhaps a swim in the pool—or as often as not for me, a brief nod-off three or four pages into whatever book I was reading.  Vacation, redefined.

There were also days when we explored some of Taveuni’s ground-based options. 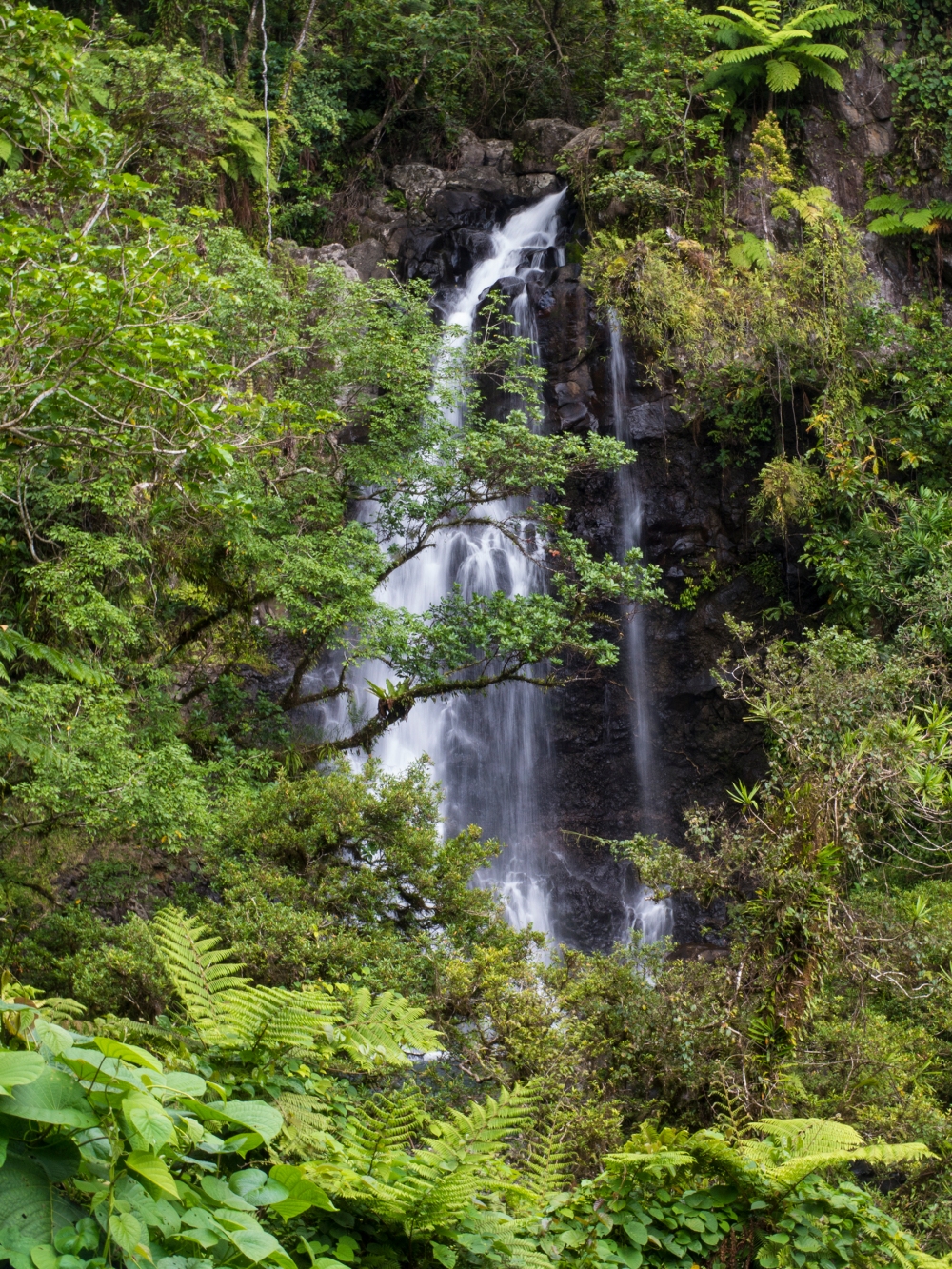 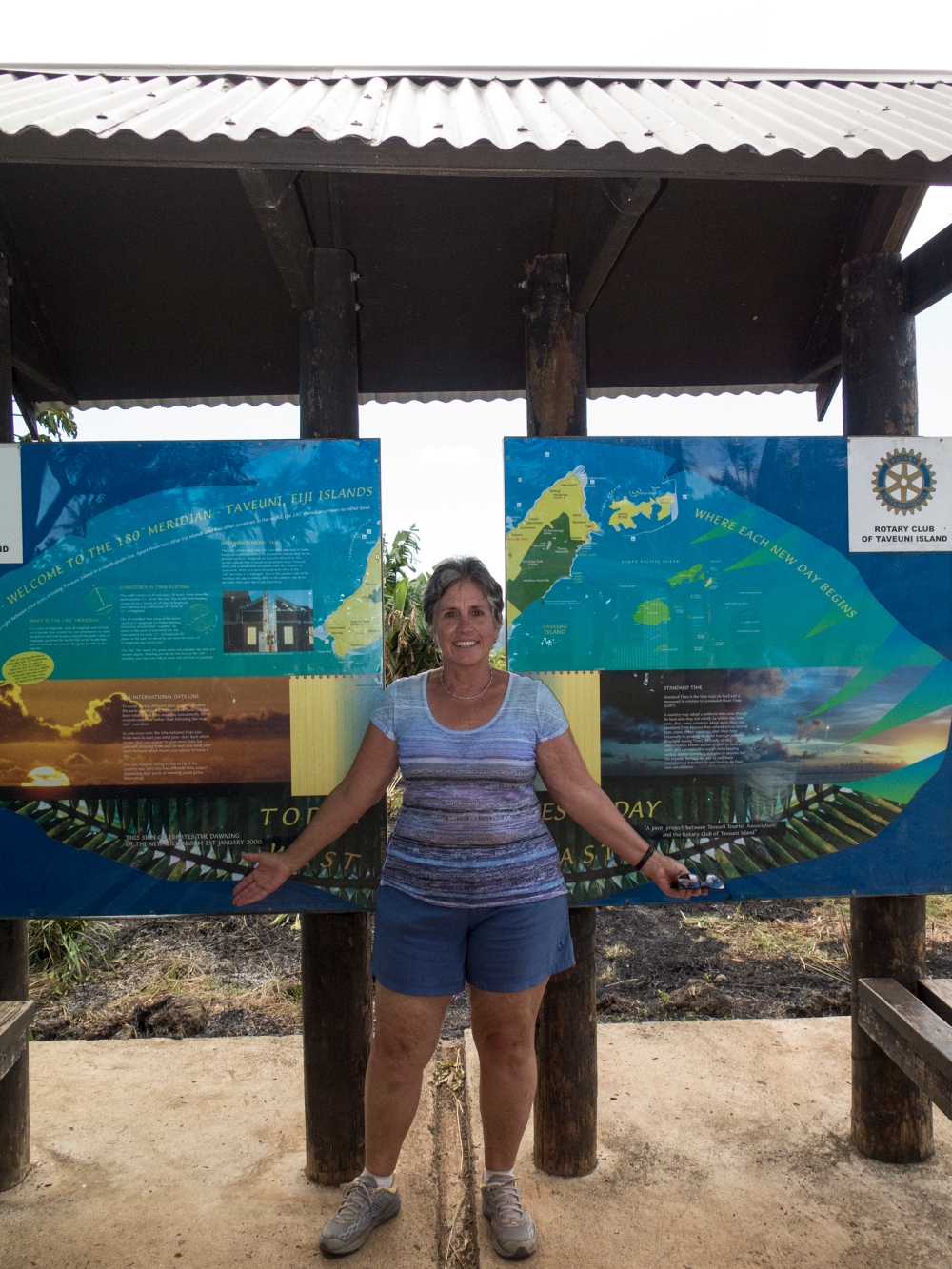 Early in a long day’s island exploration with our driver guide Jim, we stopped to visit Wairiki Catholic church.  Built in 1909 (and honoring a French missionary who suggested a successful strategy to defeat a Tongan war party) replete with stained glass, but replacing pews with palm floor mats.

We came by in the midst of an island-wide childrens’ Rugby tournament.  Fijians are perennial Rugby powerhouses.  Imagine a stateside soccer tournament, with kids’ games going on throughout the day, the families rooting on their brood from the shade of trees encircling the pitch…and being watched over by Mary in white vestments.

There’s a backstory here, as well.  We learned that Jim, who also had picked us up at Matei airport when we arrived on our first morning in country, was also a minister in a very small church that he started after being moved by The Spirit on a visit to Brisbane, Australia.  Much against his personal inclinations, this quiet man of faith, heeded the call, seeking to share Christ’s story with his Fijian counterparts.

On our return that day we were treated to a rain falling and a lovely down-sun rainbow.  Our bure (room) is framed by the notch in the double palm and its hammock. 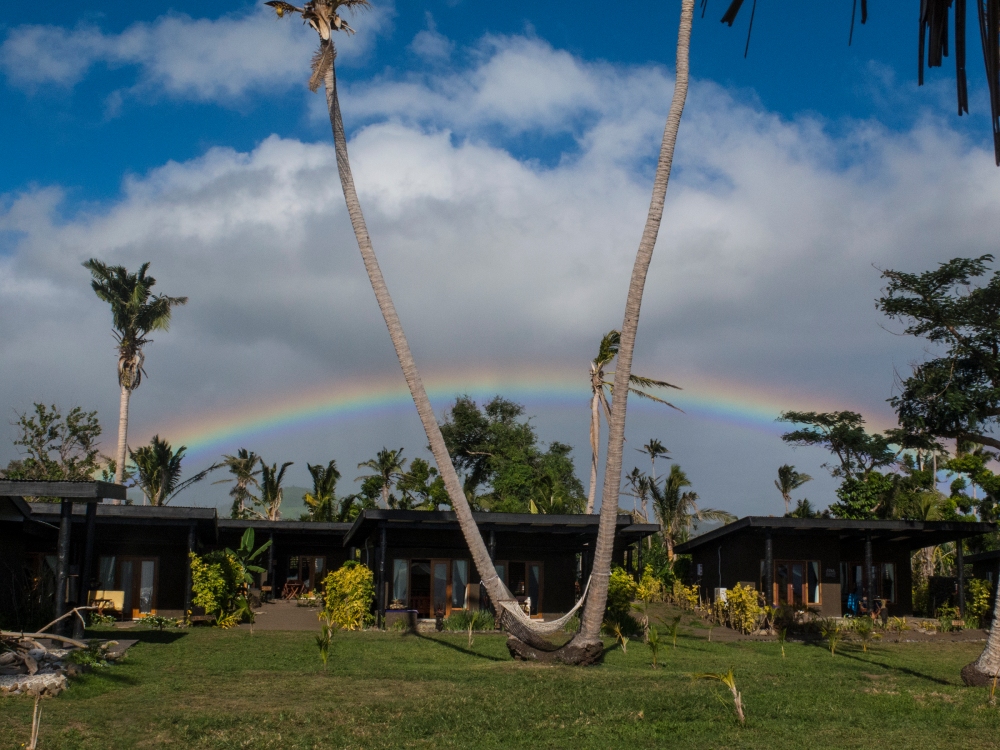 But still there was more diving to be had, reefs to explore, and creatures to gawk at, including two lionfish.  They are invasive and destructive creatures with very venomous fanning fins.

Docile, but venomous.  Check out the outrigger paddle eyebrows.

I managed to find a couple of giant clams, several feet across, and similar to the one that holds up the coffee table in our living room, if you’ve been to the Del Mar digs. 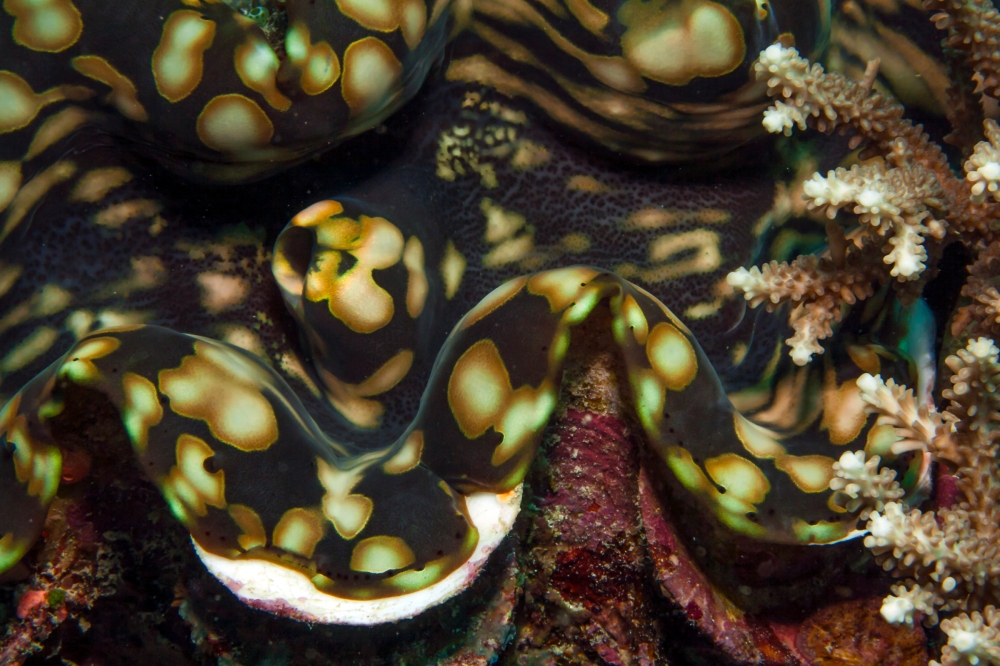 Delicate camouflage of a giant clam

And we also encountered some larger creatures.  This picture lacks the brightness and color of my underwater strobe because this six or seven foot shark was shy, and my “there goes the neighborhood” arrival disturbed its bottom chillin’, scooting away before I could get close enough to do the image justice.

For me, the highlight of the dive creature encounters happened as I was running out of air, and starting an ascent to a nitrogen out-gas safety stop at fifteen feet under.  Looking down, past Carolyn (a delightful French film producer living in London) two six-foot across black speckled stingrays were fluttering together in a mating pax de deus, their fins’ periphery a lilting dance of the veils.   I can assure you, we were lost to them in the heat of their amorous ardor. 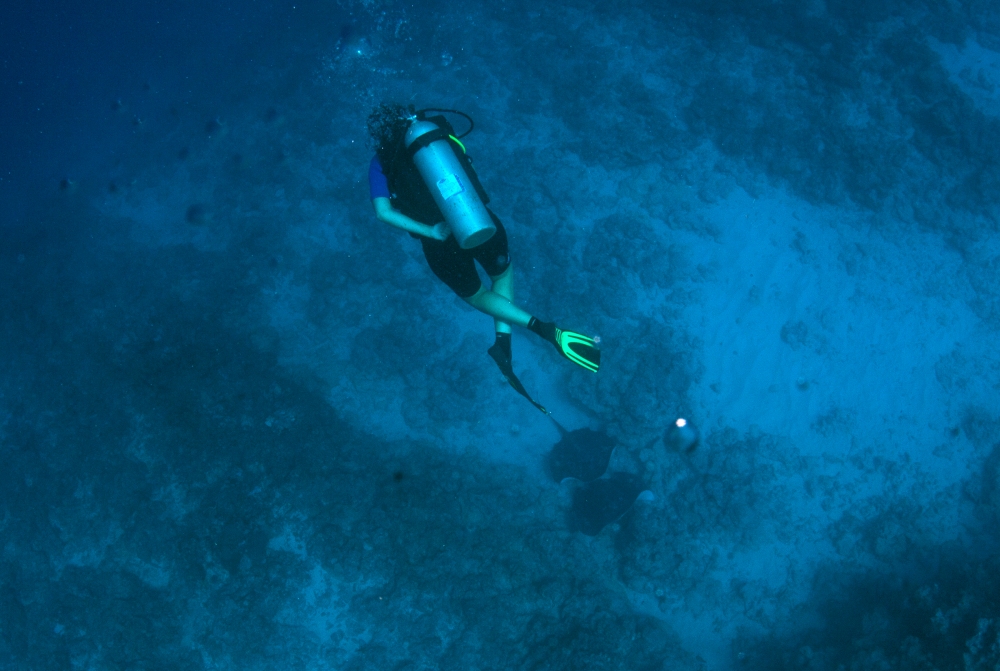 Perennial favorites of dive photography are anemone fish.  They live embraced by the anemone tendrils, which are quite toxic, but for which these Clownfish (their coloring) are immune.  A safety mechanism that keeps predators at bay.

Clownfish, immune to the stinging tentacles of the anemone undulating in the surge.

And when the diving day is done, maybe a Fiji Bitter and a bit of quiet time taking in the approaching sunset?  Here, I’ve started a time lapse and am nursing my brewski while reading a book.  Hammock-borne multi-tasking, Paradise Taveuni style.

A time-lapse underway. Chill out time with a Fiji Bitter

The time lapse from above

Or stills from this and other sundowns.  The first is of a catamaran that came to the mooring to pick up a group of U.S. physicians who took off by the vessel to provide pro bono sick call at multiple small Fijian islands.   A nice way to give back. 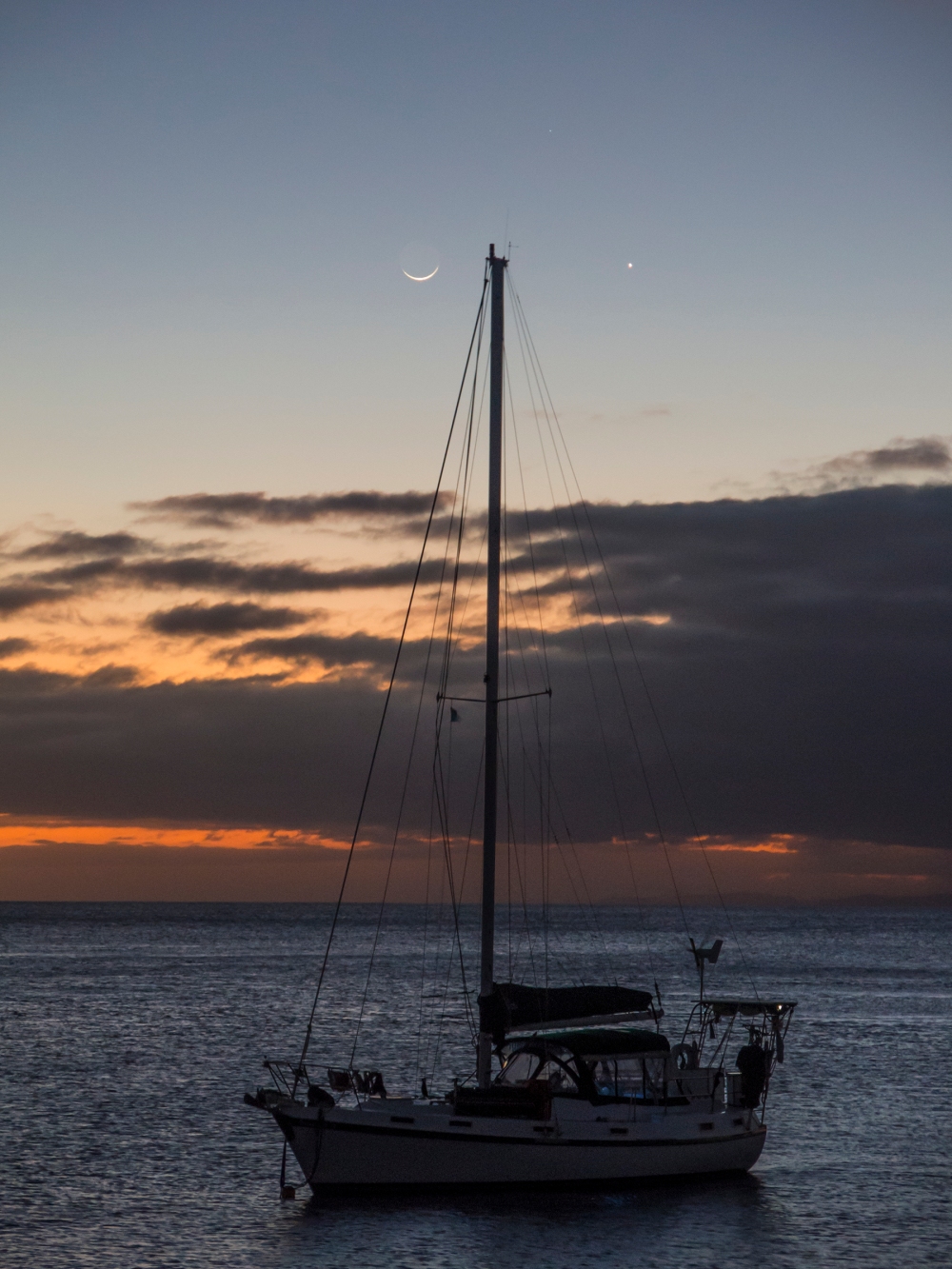 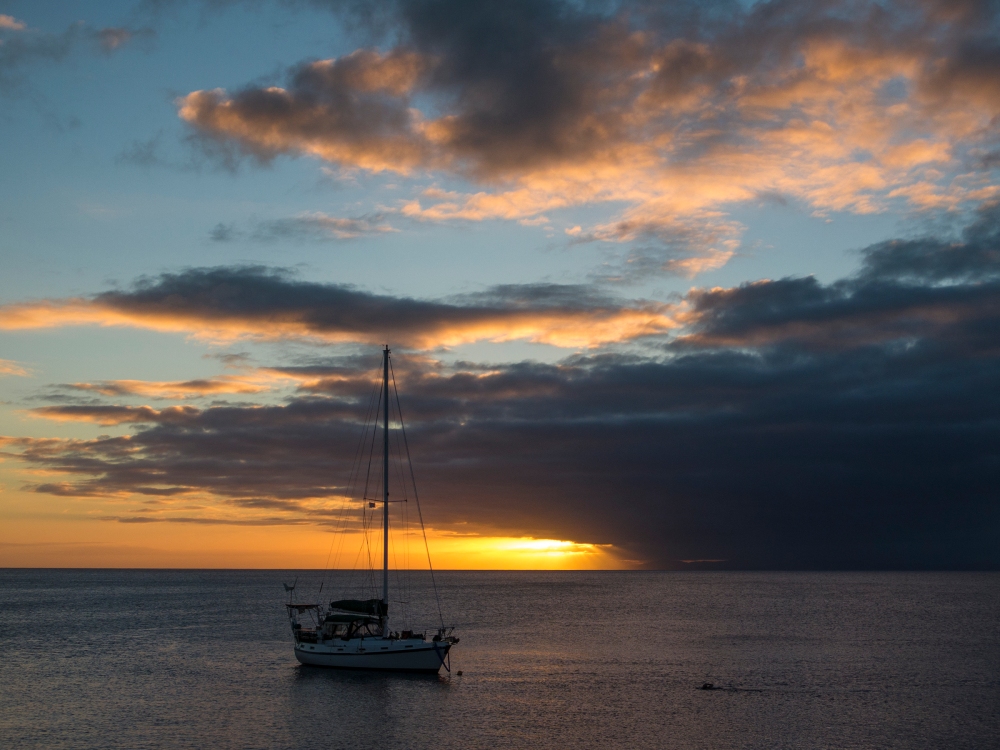 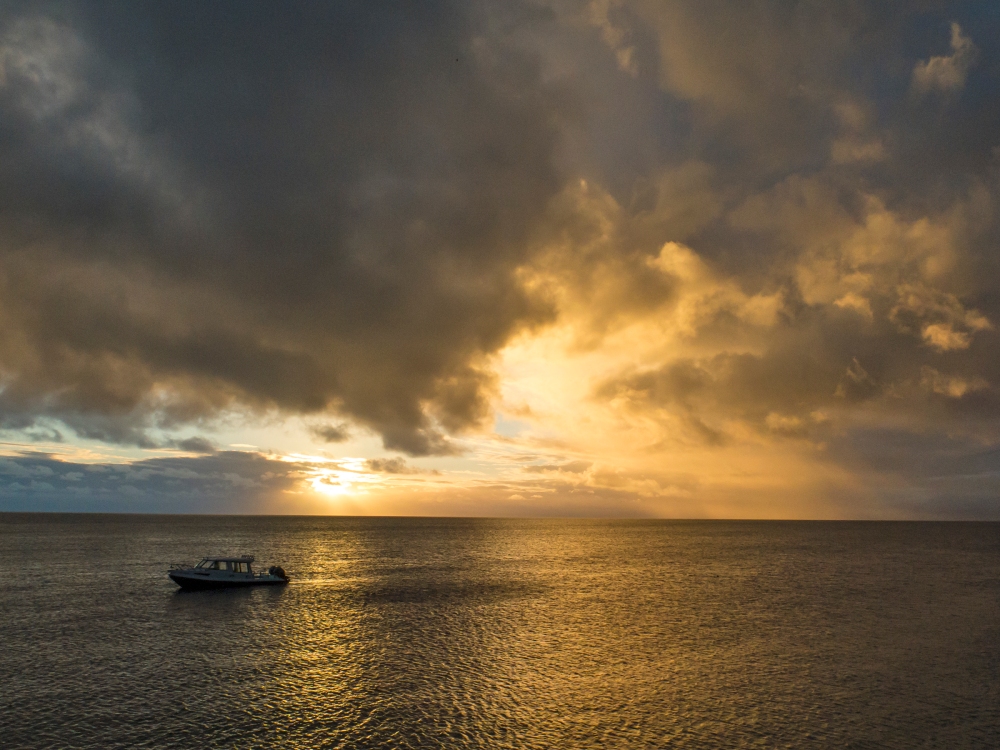 So yes, our bridging the hiatus of family dive trips was accomplished in an exemplary and altogether satisfying fashion.  The Fijian subaquatic environment is healthy and beautiful,  Fijians the warm, exuberant people of our recollection.  And Paradise Taveuni was lovely and getting posher through the ministrations of Allan and Terry and their entire staff.  Vinaka vakalevu.  Thank you very much.

Moon and planet light on the water

← The Nature of Nurture. The Nurture of Nature.
Peak Color →